Many of us probably have screen protectors (or at the very least, a protective case) for our smartphones. But should you have one for your Nintendo Switch? In short, a screen protector can help extend the life of your pricey console, which is something everyone wants.

But how exactly does a screen protector carry out this role as a bodyguard for your Nintendo Switch? And do all versions of the Switch benefit from a screen protector, or is it just an extra, unnecessary purchase?

Yes, but for Different Reasons
Original Switch and Lite Have a Scratch-Loving Plastic Screen
The Switch OLED Isn't All Glass After All
The Best Screen Protectors for Your Switch

Yes, but for Different Reasons

Original Switch and Lite Have a Scratch-Loving Plastic Screen

Both the 2017 Switch and the Switch Lite are made with a plastic screen, which is a fantastic safety feature as it’s shatterproof. Plus, plastic is a lot cheaper to manufacture than glass, which translates to a lower retail price for consumers.

The biggest hiccup with a plastic screen, however, is that it’s extremely prone to scratches. If you drop your Switch or it accidentally bumps up next to something in your bag while traveling, the chances of the screen getting scratched are high. You can even scratch your screen just by docking your Switch to charge it.

A screen protector goes a long way to keeping your Switch in pristine condition. Although there are plastic screen protectors out there, tempered glass options are better in every way.

On top of being scratch-resistant to keys, coins, and other hard objects, tempered glass screen protectors can also reduce glare, which in turn prevents eye strain and tension in your face. These glass protectors also come with a special oleophobic coating on the outside that’s resistant to fingerprints and other smudges or dirt.

And because it’s made with tempered glass, the screen protector won’t break into sharp, unsafe shards if you drop your Switch. Instead, it’ll break into a spiderweb-like pattern that’s a lot easier and safer to dispose of and replace.

The Switch OLED Isn’t All Glass After All

Well, the OLED Switch’s screen isn’t made of tempered glass; instead, there’s an anti-scattering adhesive film over traditional glass. And this protective film only has one job: to prevent glass shards from scattering if the screen breaks. It won’t actually prevent the screen from shattering in the first place.

Because of this, it’s still imperative that you get a screen protector for your OLED Switch. Although it may look nicer than the 2017 Switch, the OLED Switch’s glass screen is more prone to cracks and shatters than the older Switch’s plastic screens.

It’s important to mention that, even if you buy a tempered glass screen protector for your OLED Switch, you should leave the protective anti-scattering adhesive film on underneath. Nintendo even specifically mentions this in the information manual that comes with your Switch purchase. Screen protectors for this model are designed with this extra layer in mind and won’t hinder your ability to clearly view the display.

The Best Screen Protectors for Your Switch

The 6 Best Screen Protectors for the Nintendo Switch 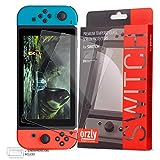 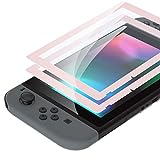 For a Bit of Extra Color 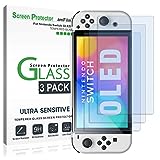