Smarthomes are increasingly popular, and one of the areas you can smarten up is your door locks. But what are the advantages? Is it safe? And if your phone runs out of battery, will you end up sleeping in the garden shed?

The global smart lock market was worth $1.4 billion in 2020, and that number will grow by 20% a year between now and 2028—so it’s safe to say many people feel secure about smart locks. However, they aren’t something brand new—they’re replacing something every home in the developed world has. And spending a few hundred dollars on making a door more intelligent might not be a priority.

But if a smart lock makes your life better, it may be worth the upgrade. Let’s take a deeper look at smart locks and what they can do for you.

What is a Smart Lock?
How Do They Work?
What Are The Benefits?
Are They Less Secure Than Regular Locks?
Are There Any Downsides?

What is a Smart Lock?

A smart lock is quite a broad term that encompasses a lot of devices. At its most basic level, a smart lock is just an electrically powered lock that can operate wirelessly. If you’ve checked into a hotel during the last few years, you’ve probably used a smart lock.

You can operate a smart lock in several ways: including with a keycard, a code, your fingerprint, an app, a home assistant, or any combination of these things. Some even accept a standard key.

They don’t have to go on the front door either—smart locks replace almost any regular lock and come in many forms. For example, standard deadbolts, padlocks, and drawer locks are all available. The devices intended for doors tend to have more features and are generally more secure.

How Do They Work?

Most smart locks are battery-powered. Those batteries will last between 10 months and a year depending on the battery you’re using, the smart lock it’s plugged in to, and how often the door is locked or unlocked. The electronics house a motor that performs the act of turning the internal lock for you, just as if you used a key or used the thumb turn.

If the lock has a keypad, you can set a code. Most modern smart locks will connect to your home’s Wi-Fi network for smart home integration. Bluetooth connectivity is also a feature on many smart locks so that you can connect directly to your cell phone.

Most smart locks also include backup systems such as a manual keyway or the ability to attach a nine-volt battery should the lock’s internal battery fail.

What Are The Benefits?

The ability to lock or unlock your front door from anywhere is a massive plus. Need to let a plumber into your house, but you’re stuck at work? No problem, there’s an app for that. Expecting a package delivery? Same deal. You can even pair your smart lock with a doorbell camera so you can be sure of who you’re letting in and what time they’ll leave.

Coming home with heavy shopping and don’t want to mess around with a key? Unlock your door from the car. Equally, if you second-guess their ability to lock up before they leave for the day—you can double-check your door’s status on your phone and lock it remotely if necessary. Many locks will allow you to schedule a relock too, either after a certain number of minutes since you unlocked the door or at set times. With scheduling, you won’t have to worry about forgetting to lock the door.

Are They Less Secure Than Regular Locks?

While it’s easy to believe the opposite, smart locks are potentially more secure than standard locks. There are probably more criminals capable of picking a traditional Yale lock than there are capable of hacking into your Wi-Fi network. Lockpicking is a skill anyone can pick up with Youtube and a bit of practice.

Beyond that, you could have a near-impenetrable bank vault-style door on the front of your house. That door will only be as effective as the nearest glass window. The bottom line is, if someone isn’t too concerned about things like laws and wants to get inside your house—they probably will. But most thieves don’t want any hassle; they’re opportunists looking for an easy score. So if your smart lock locks your door, it’s just as effective as a standard lock would be.

A smart lock’s ability to interact with your home security system and its remote capabilities are a game-changer. If you’ve got a home security system and a doorbell camera connected to your smart home network—your smart lock may be able to set both of those off if someone attempts to force their way in. You’ll get an alert, a look at the burglar, and your alarm system will inform the authorities.

Equally, leaving a key under a garden gnome is risky. So is leaving a package on your porch. Unlocking your door remotely for someone who needs to be in the house briefly is a lot safer.

Are There Any Downsides?

There are a couple of faults unique to smart locks. You will have to change the lock’s batteries at some point. If you’re not the kind of person who stays on top of home maintenance tasks like that, you’re probably not going to have a backup nine-volt battery stashed away for emergencies. Next thing you know, it’s 2 a.m. and you’re at a Walmart buying a battery so you can get back into your house. That said, most smart locks will send out warnings when the batteries are getting low. You’ll also likely notice the motor turning slower as the power winds down.

Smart locks can also be expensive and aren’t one of those things you would want to skimp on. You can buy good, inexpensive, smart products. But the consequences of a smart bulb malfunctioning and your front door deciding to do something strange at the wrong time are drastically different.

And if you live in a Home Ownership Association (HOA), you may find the local rules a barrier to installing a smart lock in the first place. Most smart locks are visible even on the outside, and some would describe them as ugly. Some HOAs bar any visible changes like that to the outside door. In that scenario though, you could go for a Level lock, which hides inside the door. You won’t get a keypad, but it should fit within the rules. And it should go without saying that if you don’t own your home, you probably can’t install a smart lock.

Most other negatives are offset by the fact a good smart lock is a series of backup systems stuck together. If your Wi-Fi fails you have Bluetooth or a keypad. So when shopping for a smart lock remember the more functions it has the better. 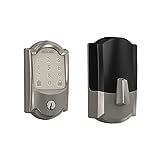 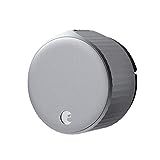 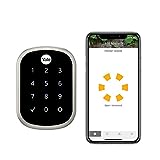 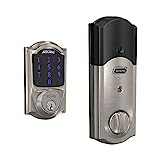 Best for Z-Wave or Ring