If you weren’t a fan of the Galaxy Z Flip 3, don’t get your hopes up for the Galaxy Z Flip 4. The latest flippin’ phone from Samsung simply refines its predecessor’s design. Its most notable improvement, oddly enough, is a larger battery.

Note: Check out our detailed review of the Galaxy Z Flip 4 for camera samples, our impressions, and more.

Still, last year’s Galaxy Z Flip 3 wasn’t a bad phone. It scored an 8/10 in our rigorous review and gave us a strong impression of how smartphones will look in the future. The Galaxy Z Flip 4 might be a minor upgrade, but it still looks like a solid device.

Here’s the raw specs for all you spec-heads out there:

If these specs sound familiar, that’s because they’re basically unchanged from the previous model. But as always, the devil’s in the details—read on for a detailed analysis.

Pre-orders for the Galaxy Z Flip 4 opened on August 10th after the 2022 Unpacked event. The phone debuted alongside Samsung’s Galaxy Z Fold 4, the Galaxy Watch 5, and the Galaxy Buds 2 Pro.

Like its predecessor, the Galaxy Z Flip 4 starts at $999. It comes with 128GB of storage, though customers can upgrade to 256GB. There’s also a new 512GB storage option, though all configurations of Galaxy Z Flip 4 use 8GB of RAM.

Two of the Galaxy Z Flip 4’s colors are a rehash from last year—Bora Purple and Graphite. But customers can also pick from Pink Gold and Blue colorways. Despite Samsung’s attempt to draw in young users, these color options still feel quite modest.

But if you want to get crazy, Samsung will let you design a Galaxy Z Flip 4 using its Bespoke customization system. The company says that you can mix and match to create 75 distinct color combinations for the phone.

The Galaxy Z Flip 4 is nearly indistinguishable from its predecessor. I even considered including a photo of last year’s model to see if anyone would notice. Still, there are small improvements to the phone’s overall design.

Unlike previous models, the Galaxy Z Flip 4 uses flat edges with a metallic finish (sort of like the edges on a new iPhone). It also has a smaller air gap when closed, thanks to a new Slim Hinge. Durability doesn’t seem to be improved over previous models, but for what it’s worth, the Z Flip 4 still offers IPX4 water-resistance.

And despite rumors of a larger cover display, the Galaxy Z Flip 4 still uses a 1.9-inch outer screen. This screen lets you cycle through important information, such as smart home controls or settings. You can also use it to take selfies using the external camera array, which is a lot more powerful than the dedicated selfie camera.

To me, the only big surprise is the new 3,700mAh battery. That’s a huge upgrade from the 3,000mAh battery that plagued the Galaxy Z Flip 3, and to be honest, I’m shocked that Samsung could increase the battery capacity of this device without making it thicker. (Well, the new phone is about 5 grams heaver than its predecessor.)

The Best Cases For Your Samsung Galaxy Z Flip 4 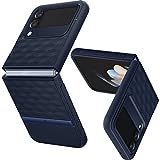 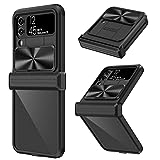 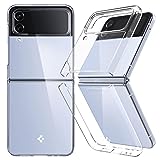 Spec Talk: A Huge New Battery and a Better Chipset

As I’ve mentioned throughout this article, the Galaxy Z Flip 4’s biggest upgrade is its 3,700mAh battery. It’s a significant improvement over the previous model, which suffered from a poor battery life due to its modest 3,000mAh capacity.

We also get 25-watt charging with a compatible adapter (not included), which is a solid improvement over last year’s 15-watt charging. And of course, the new Snapdragon 8+ Gen 1 chipset is a pretty big upgrade—it’s more powerful than the Galaxy S22 Ultra’s Snapdragon 888 chipset!

Clearly, Samsung knows that this $999 phone needs flagship specs. But the upgrades fail to extend beyond the battery and chipset, which is a disappointment.

All of the specs I’m about to mention are a rehash of the Galaxy Z Flip 3—only the inner display has a 120Hz adaptive refresh rate, all configurations come with 8GB of RAM, and the cheapest model packs just 128GB of storage. (Samsung offers a new 512GB storage configuration, for what it’s worth.)

But of course, some specs shouldn’t change. We’re happy that the Galaxy Z Flip 4 has an IPX8 water-resistance rating, a side-mounted fingerprint sensor, and reverse wireless charging support.

Samsung gave the Galaxy Z Fold 4 a huge camera upgrade. But the new Flip 4 is stuck in the past. It still uses a 12MP main camera, a 12MP ultra-wide lens, and 10MP selfie camera.

Still, camera quality shows slight improvements in this model. The new Snapdragon 8+ Gen 1 chipset will offer more overhead for Samsung’s image processing software, and at a technical level, Samsung made a very tiny tweak to the main camera ‘shardware.

The Galaxy Z Flip 4’s main camera uses a 12MP sensor, but with a new 1.8µm pixel size (an upgrade from 1.4µm). This should, in theory, reduce noise in photos and improve low-light camera performance, at least for the main lens.

Nitpicking camera specs is almost always a bad idea. But we found that the Galaxy Z Flip 4’s photo quality is a bit underwhelming, and it seems that a proper camera upgrade would have made the difference. If you want to see camera samples for the Galaxy Z Flip 4, check out our detailed review.

Pre-orders for the Samsung Galaxy Z Flip 4 opened August 10th after the 2022 Unpacked event. The phone starts at $999, though you can save a ton of money with a trade-in at Samsung’s website. Your carrier may also offer a solid trade-in deal.

We will update this article as we learn more about the Galaxy Z Flip 4. Be sure to join our free newsletter for future updates, news, and reviews!