True wireless earbuds (TWEs) are a dime a dozen, but the ones that stand out from the crowd sound good, fit comfortably, and have decent microphones. Beyerdynamic, known for its high-quality over-ear headphones, took on that challenge with the Free BYRDs—and they mostly succeeded. Taking the Beyerdynamic Free BYRDs out of the charging case, I was surprised by how big each of the earbuds are. Compared to the sleek design of the AirPods Pro and the small size of the Samsung Galaxy Buds Pro that tuck away into your ear, the Free BYRDs look like the company added an additional layer to a standard-sized earbud.

All the extra real estate makes the touch controls easy to use. Instead of detecting the vibration of thumping the earbud, the Free BYRD’s Beyerdynamic logo is touch-sensitive. This allows the earbuds to recognize light and hard taps.

The only earbuds I’ve tested that come close to the Free BYRD’s size are the Sony WF-1000XM4s. These, which are frequently touted as the best noise-canceling wireless earbuds, are bulky because of the premium speaker and built-in tech. Why then are the Free BYRDs so big? I’m not sure, as the ANC (Active Noise Cancelling) isn’t nearly as good, but after a few days of wearing them, I forgot about their size.

Note: A Beyerdynamic representative did not comment when asked if the Free BYRD’s name was in reference to the Lynyrd Skynyrd song.

The good news is that despite their significant presence in your ears, weighing two to three grams more than other earbuds, and a lack of earwings to stabilize the devices, the Beyerdynamic Free BYRDs never felt heavy. Yes, my ears felt sore after wearing these for four or more hours straight, but I also feel that way after wearing any earbuds for an extended period.

And speaking of long listening periods, the earbuds’ battery life was fantastic. Even with ANC on, I never once killed the Free BYRDs in a single sitting. The company claims 8 to 11 hours of listening time depending on which features are enabled, an additional 19 hours using the charging case’s built-in battery, and the ability to get a little over 1 hour of use after 10 minutes of charging.

When it comes time to charge the earbuds, throw them into the charging case, which uses magnets to align each bud perfectly with two pogo pins. You can then either plug the included half-meter-long (20in) USB-C-to-A cable into the back of the case or place the device on a Qi wireless charger.

The Best Wireless Earbuds for iPhone and iPad of 2023 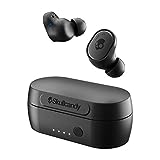 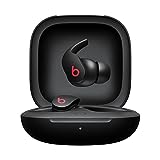 Sound Is Great After Some Tuning

Let’s now talk about sound quality, as the Beyerdynamic name gave me high hopes for the Free BYRD. I’m no audiophile, but out of the box, I found these tuned nicely, though a little lacking. Everything sounded great, and I’m sure most people would be happy with the default configuration, but I wanted a bit more oomph. Thankfully, the company’s mobile app (more on that below) includes built-in EQ settings and the option to personalize the sound to your ears using a Mimi audio test.

After customizing the sound to my ears and testing out the available EQ profiles, I settled on the “V-shape” option, which increased the low and high ends. Again, we’ll talk about the app more below, but I wish I could manually adjust the EQ presets to really nail down the sound.

We should also discuss the Free BYRD’s ANC and Transparency modes. Starting with ANC, I was honestly disappointed with these earbuds’ performance. While it definitely cut out a decent amount of white noise compared to ANC being off, there was still a ton of sound coming in. They’re nowhere as sound-isolating as other earbuds like the AirPods Pro, so the ANC can only do so much.

I recommend testing the eight pairs of ear tips that come with the earbuds (three of which are made of foam). Finding the right fit ensures as little sound as possible makes it through to your ears.

Transparency mode, on the other hand, was surprisingly good. It’s nowhere as good as that found on AirPods, which allows you to talk to others as if there’s nothing in your ears, but it’s still pretty clear. Voices still sound a bit electronic and you can tell that the sound is partially piped in using the Free BYRD’s microphones.

The Microphone Is Better Than Average

It’s a given that most Bluetooth earbuds don’t have great microphones. The accessory’s primary focus is typically music and audio playback, and since the microphone is usually pretty far from your mouth, there’s only so much that can be done.

To my surprise, when I called people using the Beyerdynamic earbuds, the person on the other end had no issue hearing me. They shared that it didn’t sound like I was talking into my phone, but it was better than most wireless earbuds they’d heard over Zoom.

I recorded two microphone tests on the Free BYRD that you can listen to below:

As you can hear from the second clip, when there’s background noise, some of it comes through. Fortunately, the Free BYRDs washed most of it out without distorting my voice too much. I was impressed.

The App Should Let You Change Touch Controls

Everything from EQ settings to firmware updates live in Beyerdynamic’s MIY (Make It Yours) app (available on iPhone and Android). It’s your one-stop-shop for customizing the sound of the Free BYRDs and setting which voice assistant you’d like to use (including the option to use Amazon Alexa).

As discussed above, I followed the in-app instructions to test my hearing to get a personalized listening experience. I also went in and swapped between some of the EQ profiles. Both of these improved my listening experience, though I wish there were custom EQ controls, even if all they did was allow you to change each profile’s intensity.

RELATEDWhat Is an Equalizer, and How Does It Work?

The app’s most significant limitation is the inability to reassign touch controls, which is annoying because Beyerdynamic chose touch controls that differ from most of its competitors. For example, if you double-press/tap the Apple AirPods, you’ll skip to the next song. But with the Free BYRDs, double-tapping switches between ANC and Transparency modes. You have to triple-tap—which is used to go back to a song on most buds—to move forward. I cannot tell you how often I accidentally turned on Transparency mode during my testing.

The MIY app has an entire section dedicated to teaching you the Free BYRD’s various controls, so I don’t see why Beyerdynamic couldn’t use this area to introduce customization settings.

Another change I would love to see to the MIY app is in the “Statistics” section. Opening the menu, you are greeted with the earbuds’ up time, playback time, phone time, and starts. Unfortunately, you can only see the lifetime stats. You can’t view the data for your current listening period, a 30-day average, or anything else.

Should You Buy the Beyerdynamic Free BYRD Earbuds?

The longer I used the Free BYRDs, the more I liked them. The company’s oversized earbuds took some getting used to, but the sound quality and microphone quality quickly won me over.

The price tag is the most significant downside of these Beyerdynamic true wireless earbuds. If you’re willing to spend over $200 on TWEs, consider the Jabra Elite 85t and the Apple AirPods Pro. Both offer sleeker designs, best-in-class audio quality, and frequently go on sale.

Something else to consider is that the Free BYRDs do not support Bluetooth multipoint. You can pair them with up to six devices and quickly switch between them, but you can’t connect to two devices simultaneously and be able to pull in audio from either.

But if you like what Beyerdynamic offers with the Free BYRDs, you can buy them directly from the company or Amazon for $249 in Black or Gray (seen above).