Getting into vinyl records means buying a turntable or record player. And while these terms are often used interchangeably, they describe two very different products—one that’s designed for enthusiasts, and another that’s intended for casual listeners.

Now, I’ll be the first to say that this is a weird distinction. Most people aren’t nitpicking about the terms “turntable” and “record player,” and frankly, I use these words “incorrectly” all the time. But as a shopper, learning the difference between these product categories will make your life easier.

Turntables Require External Components
But a Record Player Is an All-In-One Unit
Do Turntables Sound Better Than Record Players?
Which Should You Buy?

In marketing terms, a turntable is just a “record player” without a built-in amplifier or speakers. If you want to use a turntable, you need to hook it up with external components. This gives you more control over audio quality, but of course, it requires a bit more experience than a plug-and-play solution.

Turntables are the gold standard for audio enthusiasts. They’re intended for large stereo systems and often have high-quality components for a hi-fi listening experience. That means a vibration-isolating design (to prevent skipping), a high-quality default cartridge (the thing that contains the stylus), and a balanced tonearm (to improve audio quality and reduce skipping).

Some turntables have fancy bells and whistles, such as a digital pitch control or a track-select button. But the most common upgrade is a direct drive motor, which requires less maintenance than a belt-drive system and lets you spin a record back and forth like Grandmaster Flash.

RELATEDHow Are Vinyl Records Made?

Now, in order to use a turntable, you need an amplifier (or audio receiver) and a set of speakers. You may also need a pre-amp if your turntable only offers PHONO output. This is the audio signal that comes directly from your turntable’s cartridge, so it needs to be boosted to LINE level. (Note that some amps and receivers have a PHONO input, which includes a pre-amp stage.)

That said, most modern record players have a built-in pre-amp with a LINE output, which you can plug directly into an amp or a pair of powered speakers. You may even find a turntable with a built-in Bluetooth transmitter, which can simplify the setup process.

External components are a huge turn-off for casual vinyl listeners, who usually want a plug-and-play solution. But to be clear, turntables are often more cost-effective than all-in-one record players. They contain high-quality and long-lasting parts. Plus, external components like amplifiers and speakers are easy to find at any thrift store, garage sale, or family member’s attic.

Note that “turntable” can also refer to the primary mechanical component of a record-playing device. The interconnected platter, tonearm, and cartridge are a “turntable.” We will refer to this component when talking about record players, which is why I’m giving you a heads-up. 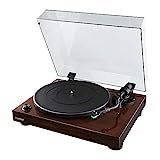 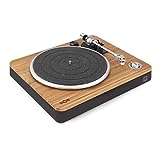 House of Marley Stir It Up Turntable 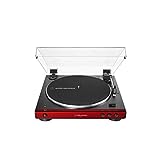 Best for Home Use

But a Record Player Is an All-In-One Unit

Record players are self-contained machines that require no external components. They have a built-in amplifier and speaker, and often come with extra bells and whistles like a radio or CD player. Some record players, especially those from Victrola and Crosley, even have a “suitcase” design for extra portability.

Because record players are all-in-one units, they’re often the best choice for casual vinyl fans. You don’t need to worry about buying (and wiring up) an audio receiver or a pair of speakers. Just throw a record on the platter and enjoy the sound.

Of course, record players aren’t perfect. They’re usually intended for casual listeners, so they often use cheap components to hit a low price point. These cheap components won’t hurt your records (despite what enthusiasts might say), but they will usually produce mediocre audio.

The all-in-one design of record players can also present some problems. You don’t want a turntable to vibrate during use, but record players have built-in speakers, which vibrate by design. And because record players contain so many active components, they tend to have more self-noise (hissing or humming) than simple turntables.

But some record players are extremely well made. They contain high-end speakers and use hardware (usually springs and foam) to isolate the turntable assembly from vibrations. The idea that all record players are “cheap” is a misconception.

Now, I don’t think that the average person will care that a record player has “mediocre” sound quality. If you’re shopping for a record player and don’t know what to buy, I suggest buying something affordable but simple to get the best bang for your buck (skip the built-in CD player and other weird stuff). If you ever want to upgrade your sound quality, you can always plug the record player into external speakers. 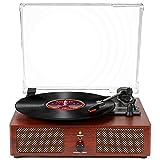 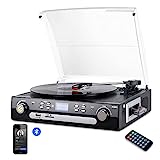 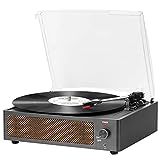 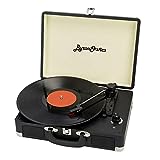 Best For Home Use 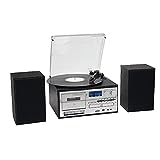 A proper hi-fi setup with discrete audio components will always sound better than an all-in-one solution. There are exceptions to this rule, of course, but it’s remained mostly true for nearly a century.

If you want the best possible sound quality from your LPs, EPs, 12-inch singles, regular-sized singles, or novelty vinyl postcards, you should buy a turntable. Hook it up with an amplifier and a pair of speakers (they don’t need to be big), and you’ll have a stereo system that’s the envy of your friends.

RELATEDHow to Clean Your Vinyl Records

You don’t even need to buy an ultra-expensive turntable to reap these benefits. Products like the Audio-Technica AT-LP60X-BK cost less than $200 and contain higher quality components than plug-and-play record players.

But sound quality may not be the deciding factor in your purchase, and that’s fine. Record players with built-in speakers are much more beginner-friendly than turntables. Plus, if you buy a record player with audio output jacks, you can always hook it up with external components (though sound quality will still be limited by the record player’s hardware).

Which Should You Buy?

If you just want to play some LPs but have zero experience with hi-fi components, you should buy an all-in-one record player. It will give you a simple and easy experience, and in time, it could help you become more familiar with audio hardware.

But those who want the best possible audio quality should buy a turntable. If you’ve never used an amplifier or have no idea what “speaker wire” looks like, this will be a bit of an adventure. My suggestion is to purchase a brand new turntable (vintage units usually need some TCL) and look up turntable setup tutorials on YouTube.

I also suggest buying your first amplifier and speakers at thrift stores or garage sales. Doing so will help you get your feet wet at a low price. Once you get a feel for this stuff, you can try upgrading to expensive new components or hunting down vintage gems on eBay.