It’s getting harder to find battery-powered keyboards. And I mean keyboards that run on AA or AAA batteries, not the rechargeable monstrosities that constantly beg for a USB cable. Wireless keyboards that use disposable batteries last longer than their rechargeable counterparts, and frankly, they’re a lot better for your wallet and your sanity.

Note: We feature Logitech keyboards throughout this article. Believe me; it’s not because of favoritism. There just aren’t a ton of high-quality keyboards that use disposable batteries.

AAAs Give You a Longer Battery Life
Lithium-Ion Batteries Wear Out Quickly
You Can Always Use Rechargeable AAs or AAAs
Devil's Advocate: The Downsides of Disposable

AAAs Give You a Longer Battery Life

The battery life of a wireless keyboard is affected by several factors, including usage, design, and software. But the size and type of battery used by a keyboard is usually the determinate factor in this equation.

Disposable alkaline batteries are less energy-dense than lithium-ion cells. So, in theory, a wireless keyboard should always last longer on a rechargeable battery. But that’s rarely the case.

Your average rechargeable keyboard will last a couple of months on a charge—but only if you buy something expensive like the Logitech MX Keys and disable flashy features, such as backlighting. In reality, most people get a week or two out of their rechargeable keyboard.

Compare that to a keyboard with disposable batteries, which may last over a year on a pair of AAs. With a set of AAAs, you can usually expect around six months of battery life.

This discrepancy is due to “self-discharge,” a problem that affects all batteries. Even when a battery isn’t in use, it slowly loses some of its power. Alkaline batteries have a fairly low self-discharge rate, losing about 3% of their charge per year. But lithium-ion batteries self-drain at a rate of 3% each month in ideal conditions, according to manufacturers.

Unfortunately, battery capacity is also a part of this conversation. Rechargeable keyboards are usually pretty slim, so they often use smaller batteries than they should. The Logitech MX Keys, for example, uses a 1,500mAh battery. Compare that to the cheaper Logitech K780, which uses two AAA batteries for an approximate capacity somewhere between 2,000 and 2,200mAh. (Two AA batteries would give you a capacity between 4,000 and 6,000mAh.)

And just to be clear, I think that rechargeable batteries are an appropriate option for power-hungry keyboards. The RGB lighting on your gaming keyboard will bring any battery to its knees, and a bi-weekly recharge just makes more sense than a weekly battery replacement.

The fan-favorite Logitech K780 wireless keyboard can remember three wireless connections, allowing you to quickly jump between devices. It's affordable, comfortable, and lasts for over half a year on two AAA batteries.

Rechargeable devices eventually lose their ability to hold a charge. That’s because lithium-ion batteries wear out very quickly. Your phone may have a noticeably shorter battery life after just a year or two, and the same thing happens to rechargeable keyboards.

Technically speaking, this shouldn’t be a huge problem. Lithium-ion batteries are inexpensive to produce, and they’re relatively safe, so they should be user-replaceable.

But manufacturers don’t care about device repairability. Removing the battery out of a rechargeable device will usually void its warranty. And anyway, such a repair is often impossible without tools and YouTube tutorials.

So, how does the average person handle this problem? They throw their keyboard into a dumpster and buy a new one. It’s an unnecessary waste of money, and it takes a huge toll on our environment.

Keyboards that use AA or AAA batteries don’t have this problem. By design, their batteries must be accessible and easily replaceable. Yeah, simply using disposable batteries eliminates the biggest point of failure for wireless keyboards—go figure.

You Can Always Use Rechargeable AAs or AAAs

The big complaint about AA and AAA batteries is that they’re expensive. They cost about $0.50 each, but they aren’t reusable—rechargeable batteries supposedly have an advantage here, as you can plug them into the wall and reuse them for “free.”

When it comes to wireless keyboards, I don’t really understand this complaint. A rechargeable keyboard’s battery will wear out after just a few years, forcing you to either buy a new keyboard or purchase the supplies for a repair. I’d rather spend a few dollars on AAA batteries each year!

But we don’t need to argue about which batteries cost less, because rechargeable AAs and AAAs exist. You can stick these batteries in any device that uses alkaline AAs or AAAs, effectively reaping the cost benefits of both rechargeable and disposable battery systems.

To be clear, rechargeable AAs and AAAs are a bit of an investment. And they self-discharge faster than alkaline cells, so if you’re worried about keyboard battery life, they may not be the best option. 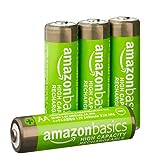 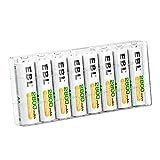 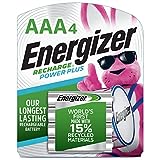 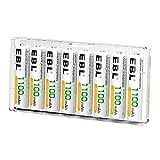 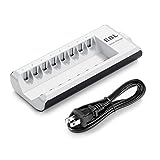 Devil’s Advocate: The Downsides of Disposable

Most people treat disposable batteries as a thing of the past, which is a shame. Alkaline batteries are perfect for certain products, such as keyboards, emergency flashlights, and clocks. The low self-discharge rate is incredibly useful.

Plus, disposable batteries eliminate a common point of failure in modern products—the worn out lithium-ion cell. Rechargeable batteries were once hailed as an environmentally-friendly alternative to their alkaline cousins, yet corporate ignorance (specifically non-repairability) often makes lithium-ion an incredibly wasteful luxury.

But I’m not going to pretend that disposable batteries are perfect. Alkaline cells are much heavier and bulkier than lithium-ion batteries. And in products that consume a ton of power (IE: not keyboards), disposable batteries can become very expensive. Those old Casio electric pianos chewed through C batteries like candy!

Plus, disposable batteries are often inconvenient and gross. Charging a keyboard is easier than replacing a bunch of AAA batteries, especially if you’re physically disabled, in a rush, or just short on cash. And if alkaline batteries sit too long, they leak potassium hydroxide, which is so caustic that it can destroy electronics and burn your skin.

And alkaline batteries carry some serious environmental concerns. They no longer contain mercury, which is awesome, but their chemical contents can leak into soil and water. Plus, alkaline batteries are rarely recycled, despite the fact that they contain useful metals and other materials. (On the other hand, lithium-ion batteries are basically the grim reaper of e-waste.)

I think that most wireless keyboards should use disposable batteries. But I know that some keyboards, especially ultra-portable or RGB options, are better off with a rechargeable cell. And hey, after living through the alkaline era, I don’t really blame anyone for hating AAs and AAAs. I just want them to know what they’re giving up for the sake of convenience.

The Logitech ERGO K860 features a split-key design with a contoured chassis for maximum ergonomics. It comes with a wrist pad, and it lasts up to two years on a pair of AA batteries.