If you’re still subscribed to Netflix, the streamer’s new trivia game will hit your screen on November 15th. Netflix’s Triviaverse is a simple concept, but it offers just enough fun to keep you entertained, whether by yourself or with that long-lost cousin on Thanksgiving.

The trivia challenege starts with a pair of glowing eyes, which represent the game’s host. After choosing to play solo or with a partner, questions on a range of subjects flash on the screen, and you have one minute to answer as many as possible. You choose your answers by selecting up, down, left, or right on your controller/remote’s D-pad. Once your turn is finished, your opponent gets a shot at the same questions. So, who goes first is critically important if you’re playing on a TV. And in Triviaverse, there are no ties.

RELATEDNetflix Continues Its Comeback With a Potential Cloud Gaming Service

Triviaverse is just the latest in Netflix’s foray into trivia and gaming. This past April, the service launched Trivia Quest. But that game was 30 minutes long and felt more child-oriented than this new release. Unfortunately, Triviaverse won’t be available to everyone. Some devices, such as the Apple TV, don’t support the game.

The Best Board Games for Large Groups 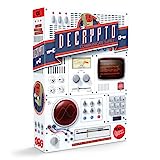 The Best of the Best Pick