We’re always excited by retro-inspired Raspberry Pi projects, especially when the result is a functional-yet-useless item. And Carter Hurd’s new Raspberry Pi Mini PC ticks all the boxes—it has a working keyboard, display, and I/O, but it’s only slightly larger than a can of soda.

Oddly enough, Hurd kicked off this project by gutting a Ditoo Pixel Art Bluetooth Speaker. It’s a boutique speaker that mimics the style of a retro PC (and displays custom pixel art), so it serves as a nice chassis for a Raspberry Pi. Well, not without some modifications, of course.

In his video, Hurd spends a lot of time trimming down circuit boards, breaking glass, and attempting to modify a Raspberry Pi. Interestingly, he slips a BlackBerry keyboard in the bottom of the chassis, and adds a tilting hinge to the “monitor.”

The results of this project are pretty impressive. While the mini desktop isn’t very practical, it’s fully-functional and looks great. It reminds me of the retro Mac calendar we saw earlier this year—hey, I wonder if you could turn this mini desktop into some kind of calendar?

Check out Carter Hurd’s YouTube video for more information on the Raspberry Pi mini desktop PC. The parts that he used to complete this project are listed in the video description. You can also peek at his website to find other neat projects, including a computer made out of concrete. 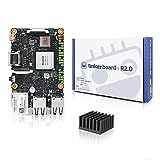 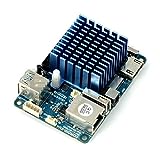