The Atomi Alpha electric scooter is a well-rounded vehicle, perfect for getting around urban areas. It mixes practical features like a combination lock and bright lights with a stable ride to offer a compelling method of nimble transportation.

Features: Sturdy and Smart
Setting Up the Alpha Scooter
Riding the Scooter: Smooth Sailing With Some Speedbumps
A Scooter for Kids?
Should You Buy the Atomi Alpha Electric Scooter?

The Atomi Alpha scooter is really a story of beauty and brains. Not only does it present a sleek, modern exterior design, but it backs it up with plenty of useful features.

In terms of performance, it has a 650W rear motor that can hit a top speed of 18 miles per hour. It’s rated to climb 20-degree hills, and although it does deliver, don’t expect to be traveling up them at the full speed.

The Alpha’s ride was smooth. Along with its 9-inch wheels and tubeless tires that are punctureless, it has a rear suspension. In practice, that means there’s a flex point in the standing area just in front of the back tire. It did make bumps less noticeable for me, but initially, that suspension took time to adjust to. It felt like the tires were not full because uneven sidewalks were not as sharp or rigid as I was expecting.

The company advertises a 25-mile range on a full charge. Your mileage may vary, however, depending on elevation changes and acceleration. One time after charging the battery to 100%, I pushed the Alpha at nearly full speed for 5.1 miles, which resulted in the battery dropping down to 75% when I finished.

Following those numbers, and my other rides, I would expect a solid 15 miles of being able to push the throttle before running the battery down to 20 or 25%. At that point, I would want to make sure I had the charger handy.

The scooter has three levels of speed if you do want to adjust the throttle power. Eco Mode goes up to 6 miles per hour. Standard Mode goes to 12 MPH, and Sport Mode goes up to 18 MPH. Both my 10- and 12-year-old kids found Eco Mode to be comically slow and even wanted more power than the Dynamic Mode offered. I felt the same way. I suspect most of you will find yourselves wanting to live in Sport Mode. (Of course, I did like that there was an Eco Mode to let them start on.)

The scooter features a Bluetooth connection for use with its companion app (available on iPhone and Android). Although most functions can be performed via the device’s small screen, it’s much easier to enable things like cruise control, different lighting effects, electronic lock, and see distances traveled in the mobile app. 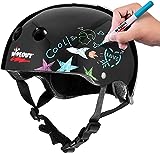 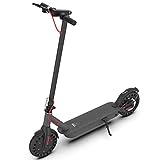 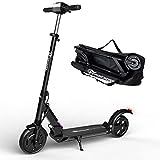 Setting Up the Alpha Scooter

Assembling the Alpha scooter only entailed putting the handlebars onto the center pole, inserting two screws to secure it, and then putting a rubber stopper on the end of the kickstand—that was it.

From delivery to being ready to ride only took about 10 minutes. Of course, it did take a little bit longer to browse the manual and figure out the controls to make sure I wouldn’t find myself doing something I wasn’t expecting.

The scooter came with enough charge in the battery to ride it around for a few minutes and test out the different speed levels. Once I had given it an initial ride, I spent a few minutes setting up Atomi’s app and going through all the settings available to it.

There are 14 different ambient lighting choices, largely revolving around different colors. These are in addition to the front headlight, which only glows a steady white light for riding visibility. The ambient lighting on the front pole and underneath the deck is fun, but it also helps other people see you in the dark.

There is a three-digit combination lock for a wire that pulls out from the frame of the scooter and can secure it. Setting up a new security code for the lock only took a minute. It’s hard to tell how well the lock would hold up to a determined theft attempt. While I don’t know if I would rely on this lock for complete security, it is a built-in option that’s always available in a pinch.

Riding the Scooter: Smooth Sailing With Some Speedbumps

My riding experience was almost completely positive. The scooter was nimble and exhilarating to use. It was both convenient and fun. In fact, there’s very little to complain about as a whole. There are some minor things worth pointing out, though.

For example, while the overall top speed of 18 miles an hour was adequate, there were moments, such as heading up a hill, when I wanted more oomph from the Alpha scooter. Basically, I wanted more torque. Not much, but just a little more.

For people wanting the most performance out of their electric vehicles, not having the highest amount of torque might be a negative. Ultimately, though, wanting a touch more torque wouldn’t stop me from considering purchasing the scooter.

The rear suspension made rides smooth, but I’m not sure it was critical to the experience. It was a nicety to have, but I wouldn’t pay extra for it.

Similarly, there are left and right turn signals that can be activated with buttons on the handlebars. I liked the idea of the buttons, but because they were vertical, instead of horizontal, I had a hard time figuring out which one I needed to press in the moment.

Seeing the screen was a little bit tricky because it’s built into the handlebars at a fixed angle. I’m 5-foot-11-inches tall, and when I looked straight down at the screen during the day there was often a glare that made the information difficult to see. I had much less problem seeing the information on the screen, such as the current speed, at night when it was lit up.

Not being able to fold the hand grips of the handlebar inwards to make the scooter more compact wasn’t a problem for me, but it may be for others. If you need the most compact vehicle to carry on a train this one might present a problem in that regard.

A Scooter for Kids?

Each of my kids rode the Alpha scooter at a local park. While the non-adjustable handlebars were a little tall for my 10-year-old daughter, she still enjoyed riding the Alpha and didn’t have any accidents or issues using it.

Neither one of them were satisfied with the Eco Mode speed limit of six miles per hour, and I couldn’t blame them. That setting was fine for the first test ride, but otherwise always felt slow. This scooter isn’t particularly kid-friendly with the non-adjustable height of the handlebars and the overall weight, but it also doesn’t preclude tweens and kids on the older side from growing into it.

Should You Buy the Atomi Alpha Electric Scooter?

Overall, after lots of riding, the only complaints I have about the Atomi Alpha Electric Scooter are the previously mentioned minor ones. It excels at being a good source of transportation while also injecting a bit of fun with colorful lights. Plus, having a connected mobile app for changing the settings and a built-in lock only added to the scooter’s overall appeal.

At a retail price point of $650, I think the Alpha scooter is worth its price. It has been on sale to varying degrees across different retailers, which only makes it a better value if you can find it cheaper.