If you already have a woodworking router and table, you’re still missing one major component: the bits! Without router bits, the tool doesn’t work. You can buy them one by one, but kits are an easy way to get started.

What to Look for in Router Bits

When you buy a router, all you’re truly getting is a fancy motor. To do anything with it, you’ll also need router bits. It’s a lot like a circular saw and a saw blade. Without the blade, the saw is useless. In the case of routers, though, your bit choices are nearly endless. And what bit you choose makes a big difference in how it performs and what shapes it cuts into your material.

While you can buy bits individually, kits are a more economical option to start. Bits in kits typically aren’t as nice as individually purchased bits, but they also cost far less per bit.

Here are a few things to pay attention to when purchasing router bits:

When you start buying expensive individual bits, you’ll want to look at other aspects like hardness, dust protection, and so on. But for your first router bits, shape, shank size, and bit material are most important.

The MLCS 8377 Router Bit Set checks all the right boxes to get you started in routing. For not a lot of money, you get 15 carbide-tipped bits. That includes four straight bits, one round over bit, a Roman OGEE bit, and more. These are 1/2-inch shank bits, so make sure your router is compatible before buying. The kit also includes a box to store the bits in, so you don’t lose them. 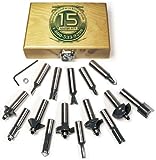 Perfect for your first router bit kit, this set includes all the important bits plus a few more. The chamfer and rabbit are perfect for more advanced cuts and the set includes a box for storage.

If you’re looking to step up in quality, Freud’s router bit will satisfy. Freud uses Titanium Cobalt Carbide, which is a harder, more densely packed carbide material than most bits use. That means they stay sharp longer and even last longer. You’ll get flush bits, round over bits, Roman OGEE bits, and more. Again, check that your router accepts 1/2-inch shanks.

The biggest complaint this set receives is the box. For shipping purposes, the holes that hold the bits are extremely tight. That makes getting the bits out to use hard. But, you could use a tool (like your router!) to enlarge the holes slightly.

Made of a hard carbide, these bits should last and last. You'll get all the most common bits, plus a few more to round things out. The storage case looks nice enough to display, too.

If you want more for less, the Hiltex bits fit the bill. The manufacturer chose tungsten carbide, which is stronger than high-speed steel but isn’t as strong as Titanium cobalt carbide. You get everything you need, including flush and straight bits, a Roman OGEE bit, and a round over bit. You even get a workable (though not pretty) storage case. And since these bits have a 1/2-inch shank, they’ll work with nearly any router, even a trim router. 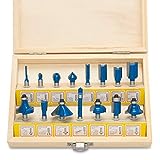 They won't last as long, but you'll spend less upfront, which makes these a great budget pick. Hiltex's bit kits come with everything you need, even a wood storage case. And thanks to 1/4-inch shanks, they'll fit nearly any router.

Don’t feel like piecing together a bit kit little by little? The Yonico router bit set has you covered. Similar to our budget pick, the manufacturer used tungsten carbide in the construction of these bits. They won’t break immediately, but they likely won’t last as long as high-end bits. But, what they lack in higher quality they make up for in quantity.

This set includes 70 different router bits. You get several types of round over, flush, straight, and even OGEE bits. You’ll get several dovetail bits, profile groove bits, chamfer bits, and more. There are very few projects you’ll encounter that calls for a bit this set doesn’t have.

As a bonus, you can buy this kit with either 1/2-inch shanks or 1/4-inch shanks.

The Everything and the Kitchen Sink Pick

You could buy one router bit at a time until you have everything you need. Or you could pick up this kit with its 70 router bits. That'll cover nearly all your needs. You can pick either 1/2-inch shanks or 1/4-inch shanks.

Josh Hendrickson Josh Hendrickson has worked in IT for nearly a decade, including four years spent repairing and servicing computers for Microsoft. He’s also a smarthome enthusiast who built his own smart mirror with just a frame, some electronics, a Raspberry Pi, and open-source code. Read Full Bio »

Wolverine Titan 8-in-1 High Resolution Film to Digital Converter with 4.3" Screen and HDMI Output (Black)
1275 people were interested in this!

Shop Now
Wolverine Titan 8-in-1 High Resolution Film to Digital Converter with 4.3" Screen and HDMI Output (Black)
1275 people were interested in this!

AcuRite Notos (3-in1) 00589 Pro Color Weather Station with Wind Speed, Temperature and Humidity,Full Color
233 people were interested in this!