Amazon is getting into the fitness wearable game. The Halo is a small fabric band that doesn’t have a screen, and a monthly membership fee is required in order to use it. But don’t close the tab just yet: there’s some interesting tech packed in there at might make this more appealing than its simple appearance would suggest.

The Amazon Halo’s big selling point is a holistic approach to health tracking using a variety of sensors, some of which go beyond anything you’ll find in a Fitbit or Apple Watch. The Halo tracks activity, heart rate and motion sensors, continuous sleep, body fat percentage (something you usually only see on scales), and even your tone of voice to detect your current emotional state.

All of these sensors, Amazon claims, combine with a sophisticated machine learning model in the companion app and service. For example, the Halo can monitor not just the duration of any given activity, but its intensity as well, putting it above the standard “step tracker” model of daily movement tracking. Amazon says that the body fat calculator is twice as accurate as smart scales thanks to a deep nueral network and machine learning. It generates a 3D model of your body based on photos taken in the app (which is visible on the app), allowing users to predict future changes and track them over time.

The Tone feature uses “advanced machine learning-based speech processing technologies” to analyze speech, detecting pitch, intensity, tempo, and rythm, and predicting how others would react to it. This is quantified for the user in a series of qualities for your daily communication—specific conversations are highlighted as “hopeful” or similar based on time and recording. It’s kind of like an automatic fitness tracking, but for your mood, and how others might react to it.

The data collected can be connected to users’ accounts with various other organization in a feature Amazon calls “Labs.” Halo is launching with integrated health tracking and exercise features from the American Heart Association, the Mayo Clinic, Weight Watchers, Aaptiv, OpenFit, and more.

Amazon’s press materials are peppered with assurances that all data is completely confidential and only shared with partners as agreed to. The Tone recordings, for example, are “never sent to the cloud” and processed locally on your phone’s app. 3D body scans are deleted from the cloud after the AI is done processing them. Even with all these assurances, it’s understandable that some users might not be thrilled at Amazon (or even an Amazon-owned AI) keeping photos of them in their underwear.

The tracking system is not unlike Whoop, a more niche fitness tracker (also without a screen) focused on more intense athletes who need data on performance and recovery. Amazon’s approach is more general, focusing on overall wellness.

It’s also worth noting that Amazon is charging a lot less. Whoop is $30 a month (with a free strap), while the Amazon Halo is $100 with six months of free service, then $4 a month after. (Without the monthly charge, the Halo can track steps, heart rate, and sleep.) If you’re an Amazon Prime member, you can get early access to Halo for just $65, though it isn’t clear when the hardware is actually shipping.

The Halo comes in three sizes, with black, silver, and pink color options and the usual collection of accessories. It’s water resistant at 50 meters. Amazon says it lasts two days on a charge if it’s tracking your vocal tone, but seven days if you turn that feature off. While a smartphone app is shown, it doesn’t appear to be on the App Store or Play Store yet. 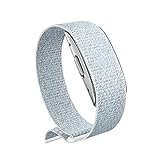